WASHINGTON, D.C. (SatireWire.com) – In an effort to keep Russia from interfering with democracy, the Trump administration today announced it has cancelled the 2018 mid-term elections. 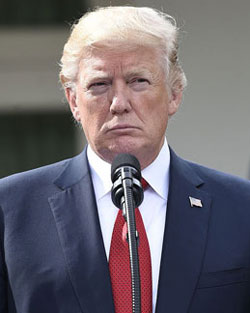 “Critics say I’m soft on Russia, but imagine how the Kremlin will feel when they learn I’ve made it impossible for them to meddle in our elections!” President Trump tweeted moments after the announcement.
“I feel OK about it,” Russian President Vladimir Putin later responded.
Trump said the move was necessary because the Russians had figured out America’s “weakness.”
“In America, we have elections, and believe me, the Russians know this,” he told reporters. “In fact, they know exactly when and where our elections are going to happen because we telegraph our intentions. We say ‘Hey, we’re having an election.’ It’s so stupid!”
That, Trump added, stops now.
“So we’re not going to have elections this November,” he said. “Maybe we’ll have them in 2019. Or 2020. Or maybe never. I’ll let you know. But this will knock them off their game. They can’t hurt our elections because we’re not going to have any elections. My predecessors never thought of this, by the way. Never. Such a simple thing.”
Trump advisor Stephen Miller likened eliminating the electoral process to dealing with a crying child.
“A baby knows that if it cries, you’ll feed it. Works every time, right?” Miller said. “But what if you never fed it to begin with? It’s never gonna cry, is it?”
Critics, however, said the approach sends the wrong message, pointing out that free and open elections are the bedrock of American democracy.
“Cancelling elections is the very thing Vladimir Putin wants,” said ranking Senate Foreign Relations member Bob Menendez, D-NJ. “Our system of voting for public officials is what separates us from tyrants like Putin and Kim Jong-un.”
“Exactly. It separates us,” Trump responded. “And maybe that’s not a good thing, OK? I mean, Putin is a great man – good friend of mine – but he doesn’t like democracy. He doesn’t like elections. So we get rid of elections, and guess what? Maybe he likes us a little more. Is it wrong that Russia likes us a little more? I don’t think so.”
A White House spokesman said the election decision would not affect the President’s recent order to use impartial Russian troops to root out the so-called ‘Deep State’ within the U.S. government.
© 2018 SatireWire.com